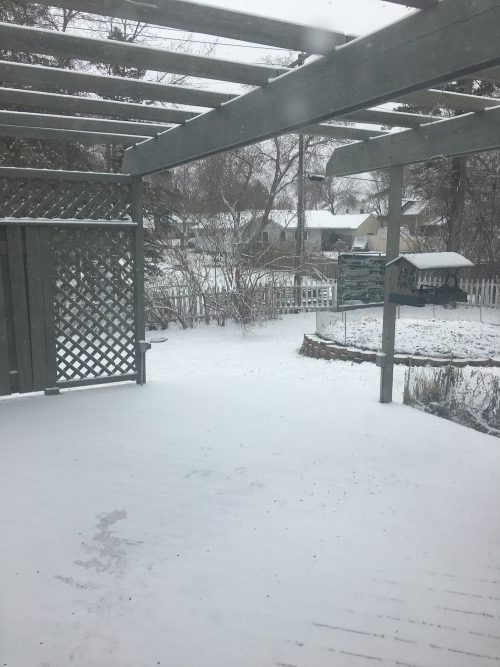 I was talking to a student from the Middle East yesterday — we are eyeballs deep in academic advising, I’m already booked up solid today with more student meetings — and she said she was very excited to be moving to the Midwest in the fall, and getting to experience seasons. Yeah, she’ll get that here. She’ll also get to experience that “oh my god will it never end” feeling.

Now to crawl back into my zoom-hole, from which I will not emerge until 6pm this evening.

“oh my god will it never end,” again.

I never liked Walz. I voted for him as governor only reluctantly, because the alternative was some nasty Republican. But today his leadership was tested, and he has failed.

Gov. Tim Walz on Monday issued a curfew in Hennepin, Ramsey, Anoka and Dakota counties from 7 p.m. until 6 a.m. Tuesday in the wake of a night of unrest following the Sunday death of Daunte Wright, a 20-year-old Black man shot and killed by police in Brooklyn Center.

As they announced the curfews, state and city leaders tried to strike a balance: acknowledging that Wright’s death had caused immense pain but also telling people they wouldn’t tolerate violence.

“For those who choose to go out … to exploit these tragedies for destruction or personal gain, you can rest assured that the largest police presence in Minnesota history in coordination will be prepared,” Walz said at a news conference Monday afternoon.

“You will be arrested. You will be charged. And there will be consequences for those actions,” the governor said.

His response to the continuing abuse of their authority by the police is to empower the police still further, give them justification for further violence, and threaten the citizens who have been harmed.

Well, fuck you too, Governor.

A police officer fatally shot a Black man, identified as Daunte Wright, after he was pulled over in a Minneapolis suburb Sunday, leading to clashes between protesters and law enforcement. On Monday, the police chief for the city of Brooklyn Center said the unidentified officer intended to use her Taser but instead grabbed her gun and shot Wright.

During a press conference, police released bodycam video of the shooting. In the video, the officer who shot Wright shouted “Taser” multiple times before firing her gun at Wright at close range while Wright was in the driver’s seat.

“I just shot him,” the officer said as the car drove away.

Why do the police need guns to make traffic stops? Why did she even need to use a taser against him?

Shut these cops down. 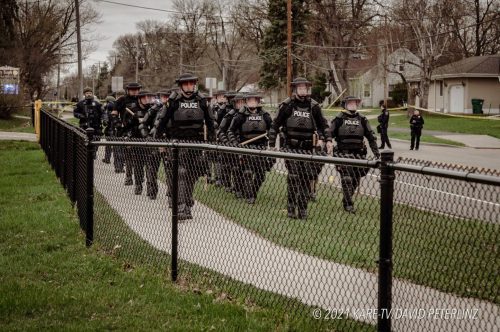 The police murdered another black man in a suburb of Minneapolis yesterday. You’d think they’d learn: the cops are on trial in this state for the murder of George Floyd, so you’d think the word would come down to not shoot anyone for a traffic violation, at least until everyone calms down and we can get back to mindless obedience to the status quo, but no. Daunte Wright was stopped for something trivial, and it ended up with him dead in the street.

In a statement, the American Civil Liberties Union of Minnesota denounced the shooting and called for a thorough and transparent investigation by an agency other than Brooklyn Center police or the BCA and for the release of all body-worn camera and dash-camera footage.

“The ACLU-MN has deep concerns that police here appear to have used dangling air fresheners as an excuse for making a pretextual stop, something police do all too often to target Black people. The warrant appears to be for a non-felony,” the statement said.

“While we are waiting to learn more, we must reiterate that police violence and killings of people of color must end, as must the over-policing and racial profiling that are endemic to our white supremacist system of policing.”

That actually wasn’t the end of it. The photo above is of a squad of Officer Friendlies descending on the neighborhood to bring their condolences to the community. And of course our governor tweeted that his prayers were with the bereaved.

Then we got the usual sensitivity from the police. 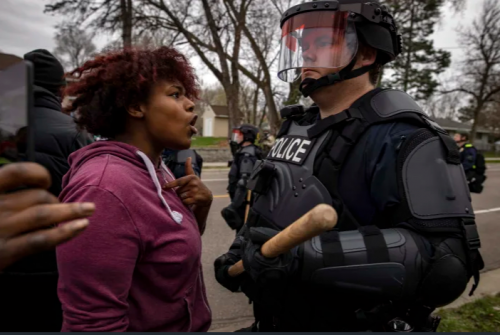 Do they ever stop to wonder if they might be the baddies? 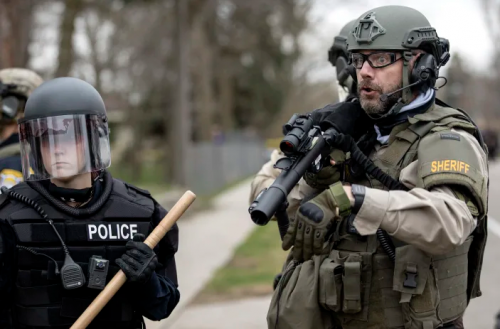 They could have predicted how the community would react. 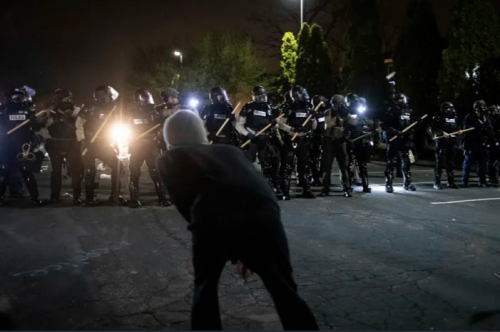 Then comes the usual smoke and fire and rage. 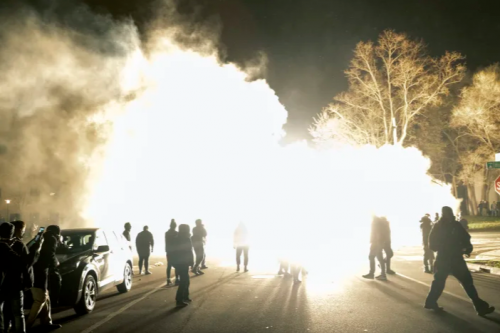 Gee, I wonder if it was worth it to keep our roads free of dangling air fresheners?

This is the first I’ve heard that air fresheners are illegal in the state of Minnesota. Apparently the Minnesota police use the presence of air fresheners as a pretext to search cars for drugs. So now you can apparently get shot for keeping the inside of your car pine-fresh.

I do not have any tattoos. I’ve admired many, and have thought of some it would be nice to have, but I always overthink them. The classic “Mary + PZ” on a heart-shaped background appealed to me, once upon a time, but it was a little trite, and I feared that once I put it in indelible words on my skin, that’s when she would leave me. And now, after 40+ years, it’s both trite and redundant.

I also love the art of the Coast Salish peoples, and have a particular salmon design in mind that I wouldn’t mind making permanent, but…I’m white as they come, belonging to the ethnic group that displaced and killed those people. It would be appropriation in the truest sense, so no, I have held off.

So I don’t think it’s going to happen now.

I can console myself with the thought that at least I’m not one of those people who gets stupid drunk and has something ridiculous inked on. Or worse, someone who puts deep thought into a tattoo that is supremely idiotic, like this one.

(Warning: below the fold in case you’re a sensitive classics teacher who cries at abuse of your discipline.)

That is a fellow who wanted to put up a warning sign for potential mates. Can you imagine if he got lucky one night, brought his date to his hotel room, started to shed his clothes, and they got one look at that, stopped, and said, “No, I can’t do this.”? At least he’ll never have a partner who is significantly smarter than he is.

I’m also imagining him at the beach, his life a living hell, because he keeps getting picked on by classics professors who come up and kick sand at him, until he’s driven to write off for a Latin textbook and study Cicero and Caesar. So maybe it will have a happy outcome?

The creationists never, or rarely, show up on the blog anymore because they know they’ll all get dogpiled with refutations here — good work, gang. The new bottom of the internet which sucks down all the worst slime is YouTube, so if you want some real grade-A primo fine examples of the dumbest humanity has to offer, just trawl through YouTube comments. I haven’t made a new YouTube video in weeks, but the rancidity still keeps oozing out. Examples:

If only we knew the trugt about moon landings, communism, and the flat earth, and weren’t being paid off by “satanic bankers”…

This guy has a Masters degree in chemistry! Therefore he knows that evolution can’t work. 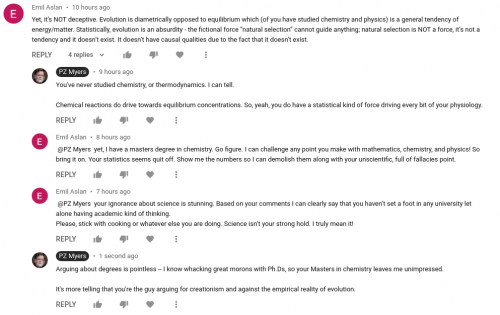 Yeah, I sometimes wind them up. They’re desperate for attention.

Facebook is probably worse than YouTube, since that’s where people gather to overthrow the government and tell each other racist things, but at least it does have the Red Skull Core. That’s a Facebook group where they make memes by putting Jordan Peterson’s actual words into word balloons coming out of the mouth of that Nazi arch-villain, the Red Skull. It’s amazing how well they work when put into that context. Those guys are always complaining about being taken out of context, right? 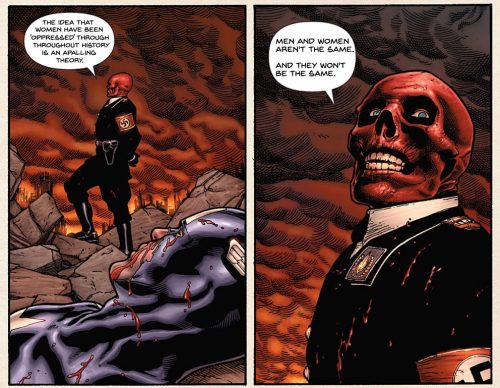 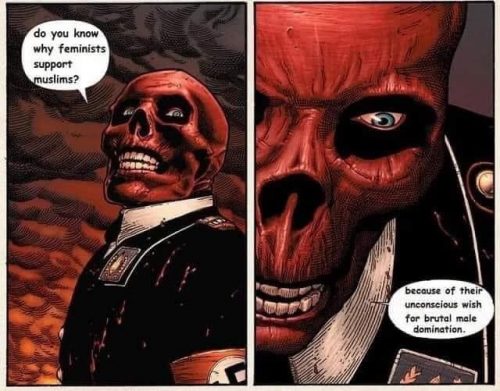 Mary and I have been laid out flat this weekend — I shouldn’t have been so quick to suggest yesterday that my recovery from the second vaccination was relatively painless. I got the fever & chills & headache that evening, and it hasn’t been at all fun.

Then just now this pretty little Asiatic Wall Jumping spider descended from the ceiling right into my face. He’s clearly trying to cheer me up. 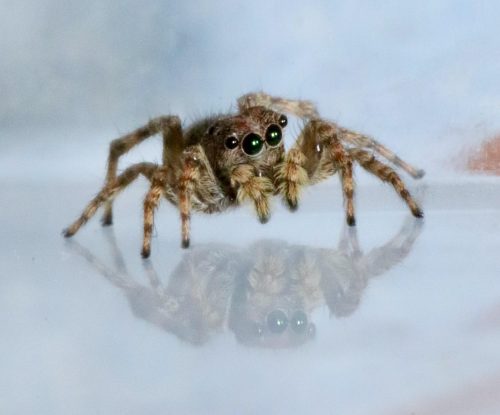 I got my second Pfizer shot yesterday, and I had had a mild reaction (lethargy, general weakness) to the first shot, so I was a little worried about this one. And so far, it’s a little worse! Just a little, though.

I woke up at 3am feeling mildly achey, but managed to fall back asleep. And then I slept in until 7am! I never sleep that late. I’m still feeling a few more aches, and my arm is definitely feeling much more sore, but it’s not bad. I have no excuse to shirk going through that massive pile of lab reports that came in last night.

I do have that strange urge to reformat the hard drive on my Linux machine and install Windows, and also upgrade my phone to 5G. I hope I get over those soon.

I was wrong. I got cocky and went for a walk, and my joints caught fire on the other side of town. Meanwhile, Mary is lying flat, whimpering. 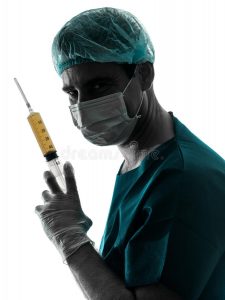 Second vaccine injection…received. Now I wait a few weeks before I can start grabbing passers-by and kissing them.

(Yuck, you know I’d never do that. Never did it before there was a pandemic, either.)